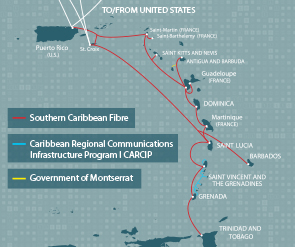 The SCF network is a submarine cable of approximately 3000 km connecting 15 islands in the Eastern Caribbean with 16 landing points: Trinidad, Grenada, St Vincent, Barbados, St Lucia, Martinique, Dominica, Baillif (Guadeloupe), Jarry (Guadeloupe), Antigua, Montserrat, St Kitts, St Barths, Saint-Martin, Sainte-Croix, Puerto Rico. SCF is the most recenet network in the region and its ring architecture provides great resiliency. In addition, mutual restoration agreements with other networks in the Region contribute to improving the protection and restoration of branches or omnibus sections. Its global architecture uses technology from the market leaders and includes route diversity, making it the most reliable network in the Eastern

SCF can also provide capacity services to Europe via Paris, namely thanks to AC-1 and AC-2 networks.

SCF offers a one-stop shop for purchasing wholesale capacity at competitive rates for the entire Caribbean region. The company also takes advantage of the possibilities of interconnections with a wide variety of partners to offer services to the Caribbean, North and South America as well as Europe.

The architecture of SCF is based on two main branches :

The Transmission layer is based on DWDM technology on Alcatel 1620LM or Ciena 6500 platforms.

The Service layer is based on the multiservice platforms 1660SM and 1678MCC from Alcatel Lucent and 6500 from Ciena.

The submerged plant is under maintenance contract with Atlantic Cable Maintenance Agreement (ACMA).

In recent years, SCF has also devoted itself to modernizing its network by integrating new transmission equipment based on Ciena's OTN (Optical Transport Network) technology. This new optical transport network combines the advantages of SDH and WDM.

The introduction of OTN in the SCF network has made it possible to facilitate standard Ethernet interconnections such as 1 GbEth and 10 GbEth.

It should also be noted that the transmission quality is significantly improved thanks to the new error correction performance (Forward Error Correction-FEC) of OTN technology.